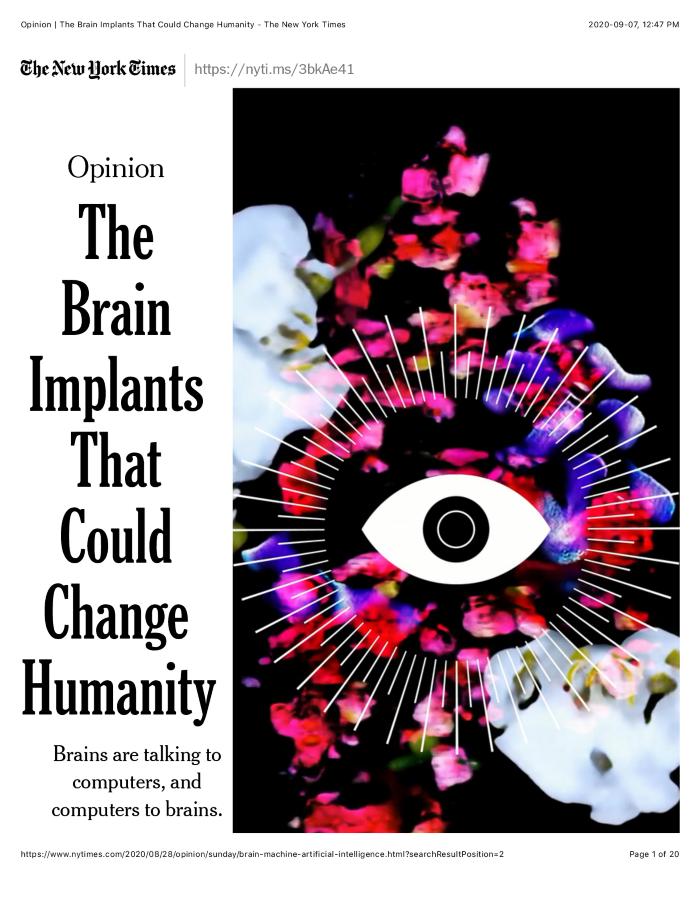 The Brain Implants That Could Change Humanity

This article charts the science and innovation behind emerging medical and health reasons to adopt an implanted brain-computer interface. It also questions the idea that it may emerge for mainstream non-medical reasons leading to further digital divide:

"Still the longer-term issue of what could happen when brain-writing technology jumps from the medical into the consumer realm is hard to forget. If my imagined focus enhancer existed, for example, but was very expensive, it could exacerbate the already yawning chasm between those who can afford expensive tutors, cars and colleges— and now grit-boosting technology — and those who cannot."

It also discusses transhuman motives to adopt: “Certain groups will get this tech, and will enhance themselves,” Dr. Yuste told me. “This is a really serious threat to humanity.” The idea that humans could "communicate faster" also appears in this article: "Every year, Dr. Nurmikko poses a hypothetical to his students: 1,000 neurograin implants that would allow students to learn and communicate faster; any volunteers?" Another pointer to transhumanism "Generally, they say, this kind of tech will be adopted first in the medical context and then move to the lay population. “We’re going to evolve to augmenting humans,” Dr. Carmena told me. “There’s no question.”

Finally, the author concludes "The lesson in Dr. Yuste’s view is not that we’ll soon have lasers mounted on our heads that play us “like pianos,” but that brain-reading and possibly brainwriting technologies are fast approaching, and society isn’t prepared for them. “We think this is a human rights issue,” he told me."

We are already cyborgs | Elon Musk | Code Conference 2016
Elon Musk’s Neuralink presentation
Mind Control: Introducing BrainGate
How we can use light to see deep inside our bodies and brains | Mary Lou Jepsen
Brown to receive up to $19M to engineer next-generation brain-computer interface
Sprinkling of neural dust opens door to electroceuticals
The Matrix - Neo Learns Jiu-Jitsu
Four ethical priorities for neurotechnologies and AI