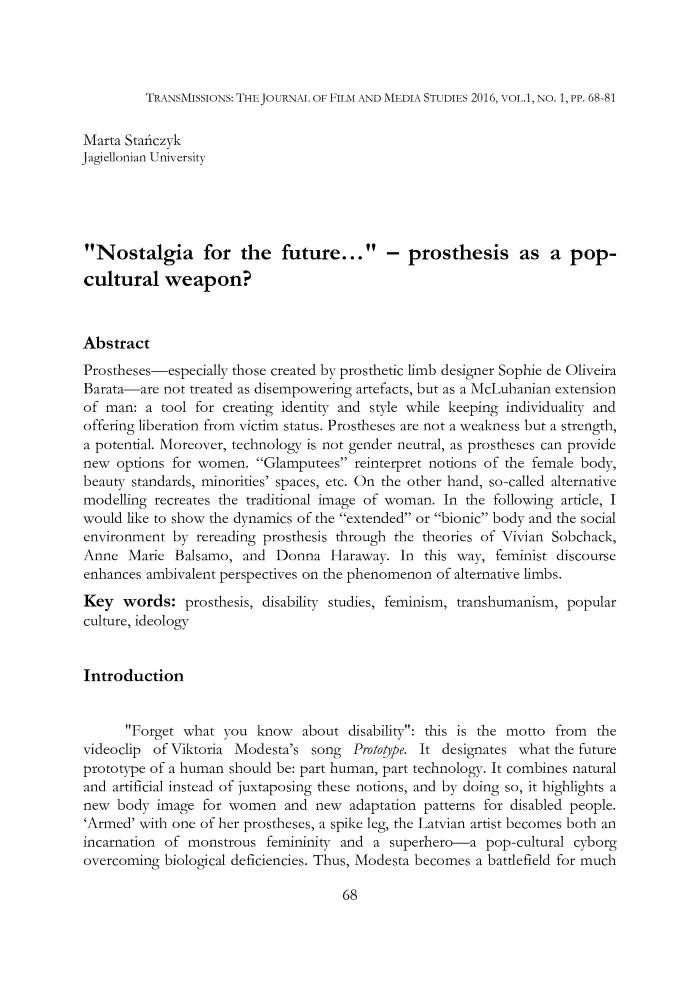 “Nostalgia for the future…” – prosthesis as a pop-cultural weapon?

TransMissions: The Journal of Film and Media Studies

Prostheses—especially those created by prosthetic limb designer Sophie de Oliveira Barata—are not treated as disempowering artefacts, but as a McLuhanian extension of man: a tool for creating identity and style while keeping individuality and offering liberation from victim status. Prostheses are not a weakness but a strength, a potential. Moreover, technology is not gender neutral, as prostheses can provide new options for women. “Glamputees” reinterpret notions of the female body, beauty standards, minorities’ spaces, etc. On the other hand, so-called alternative modelling recreates the traditional image of woman. In the following article, I would like to show the dynamics of the “extended” or “bionic” body and the social environment by rereading prosthesis through the theories of Vivian Sobchack, Anne Marie Balsamo, and Donna Haraway. In this way, feminist discourse enhances ambivalent perspectives on the phenomenon of alternative limbs.

Marta Stańczyk. (September 27 2016). "“Nostalgia for the future…” – prosthesis as a pop-cultural weapon?". TransMissions: The Journal of Film and Media Studies. Transmissions. Fabric of Digital Life. https://fabricofdigitallife.com/Detail/objects/2870